My Jungian Analyst, my Psychotherapist, my healers, and my leader from a year-long training into the initiation of the sacred feminine all reflected back to me my level of sensitivity. But so strong was my shadow around my sensitivity, compounded by my ferocious zeal to heal, I repeatedly brushed these reflections off as irrelevant distractions.

Three years later, an intimacy coach reflected the same thing; ‘you know your sensitivity is a gift, right?’ And that was when the penny dropped. Finally, I was ready to receive this truth.

I dived into the HSP literature and it did inform and speak to a part of me. But however informative it was, it wasn’t long before I felt like I was drowning.

Still facing some serious integration to do in relation to my sensitivity shadow, this literature was compounding my resistance to even begin to accept my own sensitivity.

The more I read, the lonelier I felt. I knew that all the professionals (who had reflected back to me my sensitivity, were speaking the truth, so why was this literature so painful to read? This literature was supposed to provide relief and healing. So why did it feel like a direct floodgate to my spark going out?

How Does the High Sensation Seeker (HSS) Trait Affect the Highly Sensitive Person?

It was then through Elaine Aron’s work I came across the High Sensation Seeker (HSS) trait in relation to the Highly Sensitive Person (HSP) trait, and this was when the gloves started to fit.

Zuckerman, who developed the scale for the HSS trait in 1964, observed the behavior of people who have this trait. It presents as a yearning to seek complex, unusual, and intense experiences while underestimating the risk.

People with both these traits have also been described as being ‘tortured souls.’ When I looked back at all my deeply confounding, contradictory, intense feelings and behaviors, and before I embarked upon integrating the shadow aspects relating to both these traits, I would say this was a pretty accurate description.

Now, having some sort of framework, I could begin to identify these two drives inside of me: the bodacious rebel, who wanted to cause a riot, make her impact and speak her truth, AND the silent people pleaser who would abandon herself to the point where she felt all her self-worth lay outside of her.

I lost count of the number of times I would be caught in this vicious cycle when I was in my 20’s and early 30’s partying and allowing my rebel to rip up the world, only to spend the next two weeks picking over every single last detail to the point where it felt like part of me was being attacked by another part of me.

But describing the resulting negative behavior in relationship to having both these traits only goes so far.

Research shows the interaction of sensitivity and Adverse Childhood Experiences (ACE’s) leads to negative affectivity (Aron, Aron & Davies 2005). According to W. Thomas Boyce, MD, author of The Orchid and the Dandelion: Why Some Children Struggle and How All Can Thrive, highly sensitive children (orchids) have a lower stress threshold than non-sensitive children (dandelions). According to a huge swath of research, the brains of children with ACE’s are more likely to be physically altered, resulting in an increased likelihood of anticipating future stressors as well as experiencing more difficulty in reaching a state of calm after the event. This clearly is a painfully compounding scenario for any Highly Sensitive Child (HSC).

And how do children with both HSS and HSP traits experience these conditions?

One of the biggest gifts of the HSS/HSP is our relentless seeking of the truth. But if we are not in alignment and don’t have access to the correct tools and nurturing environment, the ‘seeking’ drive can actually turn against us. So if we happen to be exposed to ACE’s, we not only experience everything the highly sensitive child experiences, but certainly, in my case, the seeking part can ‘turn’ on the sensitive part in a desperate attempt to find some sort of resolution, and it felt like a living hell.

So much is written about the high sensitivity trait and yet so little is written about this trait in relation to the High Sensation Seeking trait. With us making up 6% of the population (over 470 million), I wonder how many are walking around in huge amounts of pain, not aligned, checked out of their bodies, thinking they have some sort of mental disorder, and yet so few of us are speaking their language?

From an evolutionary perspective, highly sensitive members of over 100 animal species have been observed to ward off danger and keep their packs safe. And despite losing many of our senses over the centuries as humans, there is a reason why this trait still persists in 15-20% of the human population (E.Aron 1997). Fortunately, thanks to the HSP literature, we are beginning to again be seen as the wise sages, the considerate thinkers, leaders, and educators of our time.

The High Sensation Seeker trait has also been described as the “DRD4-7R or ‘Wanderlust’ gene” (Dr. Tracey Cooper, 2016). When the tribe ran out of food or mates or wondered what was beyond the next hill, it was perhaps this percentage of the population that went out seeking.

So far, the HSP literature in relation to having both these traits has talked about mourning what we cannot have or trying to attain some form of illusionary balance to avoid boredom on one side or overwhelm on the other. At its best, it has been seen (and I have also discovered this in my own findings of conducting 33 in-depth interviews), that having both these traits can be like a marriage where one encourages the other, resulting in the potential for huge growth.

But when you work at the shadow level of these traits, and you truly start to hear and respond to what they both feel and need, one experiences first-hand the endlessly symbiotic and amplifying nature of these traits.

With HSS’s hard wired to seek and experience ‘flow state’ and research into the HSP trait showing more brain activation in the insula otherwise known as the ‘seat of consciousness’ (B.Acevedo, 2019), it becomes less about the individual traits themselves and more about them providing a powerful vehicle into one’s own journey into consciousness.

How do I know if I’m a Highly Sensitive Person (HSP)?

This is a great question. Many people who are highly sensitive feel that they were not understood as children. They were frequently told they were too sensitive or cried too often. You can reference our list of HSP quizzes to see how you score and this can inform whether or not you are a Highly Sensitive Person.

How do I know if I’m a High Sensation Seeker (HSS)?

Some Highly Sensitive Persons find that they often get bored with the status quo. They seek unique and exciting experiences on a regular basis to be able to reach an experiential high that feeds into their work and relationships. This online quiz can be a good litmus test to find out if you’re a High Sensation Seeker.

The gifts of the HSP are numerous: we feel and process everything very deeply, we have a very rich and complex inner landscape, we are highly creative, imaginative, intuitive, and empathic and we seek deeper meaning to life and our role in it.

Having the HSS trait also means we have all of the above and that everything feels more intense. We are born to seek the truth at a profound level and we will do whatever it takes to reveal this, fast.

At a point where science and spirituality are finally beginning to speak the same language, coupled with the ever-increasing economic, political, and environmental tensions, there has never been a more transformational time in which heart-led, heart-centered, conscious, dynamic, truth-seeking leaders are needed.

With all the gifts of the HSP trait, and the yearning to activate the ‘seat of consciousness coupled with dynamic and profound truth-seeking and ‘wanderlust’ abilities of the HSS, these are some of the most dynamic and gifted leaders, educators, thinkers, healers, and visionaries of our generation.

It is time we stopped talking about them needing to ‘mourn what they can’t have’ or create some ‘illusionary balance’ as an end goal, and start to see these people as possessing the golden ticket(s) to living a fully self-actualized life.

Let’s start speaking the language and amplifying the voices of these people, for the sake of their own transformation, other people’s transformation as well as the planet.

This is a call to the hearts, minds, and souls of any HSS, and/or HSP who resonates with these words.

Six percent is enough for a critical mass to be reached. Imagine a world in which all High Sensation Seeker Highly Sensitive Persons were given the tools and the environment they needed to align with their truth.

If these words resonate with you, please send this article to anyone who you think would also benefit from reading it. Let’s start to spread the word.

**This post contains affiliate links and I will be compensated if you make a purchase after clicking on my links. 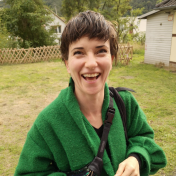 Sacha Chapman is an award-winning embodied empowerment coach and inspirational speaker and founder of Rebel Love Journey. It is Sacha’s mission to guide High Sensation Seeking (HSS), High Sensory women from feeling disconnected to feeling empowered, embodied, and whole so they can align with their true selves and begin making the impact they were born to make. Having both these traits in abundance, Sacha understands how tortuous living with these seemingly contradictory internal drives can be. Far from seeing these two traits as a painful double bind, you will realize you naturally possess the golden ticket to living a fully self-actualized life. She offers a 30-minute free, no-obligation discovery session for those people who are called to take a deeper dive with her.

Speaking and Leadership Skills for the HSP [Essential Guide]